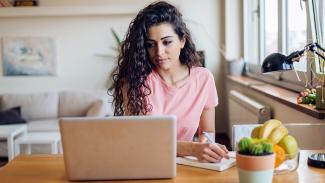 Effectively Navigating The In-Between Phases Of Life And Work

Sometimes we do get ourselves stuck, but other times we simply find ourselves marooned in the in-between—where the present feels more like the past, but the future is uncertain.

People talk a lot about finishing an existing project or starting a new one, but how can we effectively navigate the seeming wasteland between them? Whether or not we choose to be in this space, it can be uncomfortable and it is often unproductive. It’s as if we find ourselves treading water—personally, professionally and financially. But by effectively navigating these in-between phases in life and work, by releasing the outcome and exercising proactive patience, we can keep moving forward.

Maybe you’re rehabbing an injury and are out of the game or the season. Maybe you’ve sold your house and temporarily are crammed into an apartment while you’re building your new dream home. Maybe a long-term relationship has ended and you’re taking time to heal before considering coupling again. Heck, maybe you’ve gotten the first vaccine shot and are awaiting the second!

One of the most common—and challenging—in-between scenarios, however, is occupationally oriented. I spoke with a great friend and amazing professional this past week who runs her own business—but she’s in the middle of a lengthy interview process for a job that could be really stinking awesome.

The new job, if offered and accepted, would initiate a massive amount of change for her and her family. They’d have to move—and they already live in the best city in the world, for goodness’ sake—but her husband and three children are all on board for a new adventure if that’s how it breaks.

There are several meaningful pros to accompany that monumental con, though. Most notably, the job would vault her visibility within her industry, compounding her already impressive credentials, and position her as a national authority in her realm of expertise.

But the whole process of wrestling with this possibility began months ago. First, she had to come to grips with the possibility herself; then she had to communicate that development to her husband, whose work would remain in their current locale; then they had to see if the kids were on board; and only then did she really seriously consider this option.

And throughout it all, the “Will they pick me?” stress continued to build and build. The first interview. The call back. And now, a scheduled third interview. Oh, and running the business she already owns.

Most of us have been through some version of this and many other in-betweens—or we will be in the future. But as she recently brought me up to speed on the process and progress, I could feel my own stomach tighten. So I asked:

How are you managing being in the in-between?

What she told me was that she’d released the outcome. She genuinely believes that either path is good news. One offers more freedom and flexibility and requires less unwanted change. The other opens a whole new door to a range of possibilities.

She’s not paralyzed by the notion that there’s a single optimal path in life, instead believing that we have the ability to pursue a number of different branches as doors open and close, each with unique challenges, blessings and opportunities. She could even make a mistake, she believes, and still have it lead to a positive outcome (like when she lost what she thought was her dream job and ultimately started her own successful practice).

There’s also a whole body of thought suggesting that the highest achievers don’t focus as much on the goal or the outcome as they do on the process. Yes, the best coaches will say that their objective is to win the game, but the path to doing so isn’t to focus on the outcome of celebrating a win, but on the very next play.

And one of the best things about this mentality is that if you stay focused on the process and don’t win—or get the job—then it’s much easier to get over the loss, and when necessary, to focus on improving the process.

To quote Shane Parrish, “If you’re focused on the outcome, you’re not focused on the process. Sustained success comes from a fanatical focus on process.”

While waiting in the in-between for something like a new job with a lengthy interview process, you can spend your time refreshing your email every 30 seconds or always making sure that your phone is close at hand. Or you can be proactive—learning, growing and building yourself up.

It’s so much easier to be patient when you’re active.

For example, my friend remains focused on managing and improving her existing business. The injured athlete can pour his focus into rehab and game film. The person in between houses can “essentialize” their stuff. The recent divorcee can take a class on co-parenting. The quarantined kid can catch up on reading—yes, with a healthy dose of that new anime show sensation.

And we can all be persistent in our pursuit of growth—stoking our curiosity wherever it exists with knowledge that when applied results in learning and learning that when practiced leads to mastery and wisdom. Little could prepare us better for when the next opportunity strikes.

The opinions expressed by featured authors are their own and may not accurately reflect those of Buckingham Strategic Partners®. This article is for general information only and is not intended to serve as specific financial, accounting or tax advice. Individuals should speak with qualified professionals based upon their individual circumstances. The analysis contained in this article may be based upon third-party information and may become outdated or otherwise superseded without notice. Third-party information is deemed to be reliable, but its accuracy and completeness cannot be guaranteed.

By clicking on any of the links above, you acknowledge that they are solely for your convenience, and do not necessarily imply any affiliations, sponsorships, endorsements or representations whatsoever by us regarding third-party websites. We are not responsible for the content, availability or privacy policies of these sites, and shall not be responsible or liable for any information, opinions, advice, products or services available on or through them. IRN-21-1980